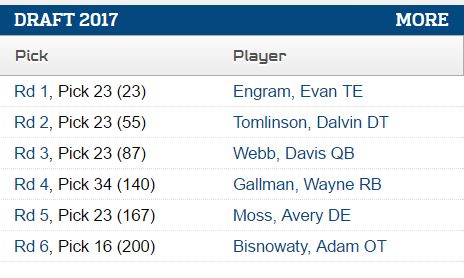 Analysis: “He’s a matchup nightmare. He can block on the perimeter. He’ll be an immediate impact player. His skill set is closer to Mike Evans. He runs routes like a wide receiver. I don’t care what you call him. Eli (Manning) is gonna say ‘Wow, I love this kid.’

Analysis: “Jamal Adams is the safest pick in the draft. You pair him with Marcus Gilchrist and all of a sudden you have one of the best safety tandems in football. I would assume Mike Maccagnan thinks he can augment the corner position because it is so deep later on.”

-The Browns have a need at QB, but they can do that with the 12th pick. Now they should take the best player in the draft.

-I think Jamal Adams (LSU) would be a better pick here, but Chicago has been heavily in contact with Allen, including pro day meetings and private workouts. Allen would be a great fit in Chicago’s 3-4 scheme as a DE.

-The Titans need a corner to replace Jason McCourty, and Lattimore fits in perfectly.

-I would prefer if the Jets traded down, but in recent years they claim they want to trade down but it never happens. I can see Malik Hooker (Ohio St.) going here, because it’s hard to see the Jets not drafting defense, but he’s too much of a risky pick at this spot.

-This is a risky pick, with Hooker not being fully recovered from his injuries. However, the Chargers have a dire need at the safety position and Hooker is the best safety in this draft. Although he is listed as healthy to many scouts.

-Fournette can be the replacement for aging Jonathan Stewart, and would be a great fit in Carolina’s offense.

-AJ Green and Williams would form a dangerous duo, because Brandon LaFell isn’t going to cut it.

-The Bills need a corner like Humphrey that can play opposite of Ronald Darby.

-New Orleans needs a presence from the inside linebacker position and Foster can provide that if you look past his off-field concerns.

-The Browns need a quarterback and Mahomes is worth the reach to fill that need.

-Thomas stays a Cardinal and can be used at many positions for Arizona. I doubt Thomas falls this far though.

-Eagles running backs coach Duce Staley told Cook’s grandmother that if Cook is still available at this pick, they’ll pick him, so here he is.

-The Colts are in dire need of a pass rusher and Barnett would be a steal if he were to drop this low.

-I see Cam Robinson going here, but with the rumor of Lamp’s agent hinting at the Ravens possibly picking him, and Lamp being regarded as the top o-line prospect, the Western Kentucky product could end up with Baltimore.

-Washington is in need of a running back, and the Stanford product would be a steal at this spot.

-Tennessee needs some type of boost in the receiving core, so the fastest man in combine history should work fine.

-Howard would be the best player available at this point and gives Jameis Winston a good target in the receiving game.

-The Broncos have many needs on offense, but Ramczyk helps fill their need at the tackle position.

-The Lions stay local and get a solid defensive end in Charlton.

-Another local pick here, as the Dolphins get a solid tight end that they’re in need of.

-The Giants are always in need of linemen and Bolles or Cam Robinson would be a great pick here.

-Conley could possibly be a top 10 pick if it wasn’t for his rape accusations. I can see a team like the Raiders taking a chance on him.

-Because who wouldn’t want to see the Watt brothers wreck havoc together?

-The UConn product would be a great safety in Seattle or a lengthy press corner in their defense.

-Should easily be a top five pick, but with diluted drug test results and with many scouts not sure where to put him, he could fall near here where the Chiefs would know what to do with him.

-Charles Harris (Missouri) would be a good pick here too, but either way the Cowboys could use a pass rusher with this pick.

-King gives Green Bay a tall, athletic corner to match up with bigger receivers in the league to help their need in the defensive backfield.

-Harris would be a steal at this point and Pittsburgh is always looking for pass rushers.

-Baker would be a great safety to pair with Keanu Neal in the Falcons secondary.

-The Saints would get a talented tackle that can play guard and help the Saints o-line.