Browns could take a quarterback here but they already have Tyrod Taylor and can draft a quarterback that can develop behind Taylor.

It’s funny how everybody was all over QB Sam Darnold earlier this year, but now Mayfield is getting the attention he deserves because he is the best QB in this draft. With Barkley gone, the Giants take the best QB available.

The Jets lose out on Mayfield but still get a solid qb in Rosen.

Cleveland gets a QB who can develop while Tyrod Taylor starts.

Not a big fan of Darnold, but he’s likely going high and the Broncos need a QB.

The Colts need a pass rusher and Chubb can do just that.

The Bucs could use more protection and Nelson is the best player available.

The Bears need to get younger at LB and Smith is the best LB available.

Ward would be a great CB to pair with Richard Sherman.

Oakland needs an interior presence and Vea helps bring that.

Ryan Tannehill isn’t the answer at QB, Jackson is if he falls this low.

A reach at this spot, but with the high pick of QBs, Rudolph won’t be available with their 2nd round pick.

James is another safety that probably won’t fall this far, but this would be a steal for the Packers.

Arizona can’t get the QB they want at this pick, but they can find weapons for whoever it’s going to be.

Terrell Suggs is getting older, and while Matt Judon is looking like a great pass rusher, drafting the best player available doesn’t hurt.

This seems like a consensus pick if he’s available at this position.

Seattle gets someone that can fill in for the loss of Richard Sherman.

Ridley will help replace the loss of Dez Bryant.

Davenport’s draft has been rising lately and the Lions could use another pass rusher across from Ziggy Ansah.

Tyler Eifert is too unreliable at tight end. I think Goedert is best tight end in the draft and this would be a great pick for Cincinnati.

With no quarterback good enough to be reached for at this pick, Buffalo should keep on building an offense that can help any quarterback.

Seems like another consensus pick here, and Miller would help protect Tom Brady.

This would be a steal for Carolina at this point of the draft, and the Panther badly need a CB.

The Titans need a pass rusher, and Evans would be a great pick at this spot.

Atlanta needs to get more athletic at the tight end position and Hurst helps out with that.

New Orleans get a great pass rusher across from Cameron Jordan.

It’s uncertain if Pittsburgh will be able to retain Le’Veon Bell long term, so Michel can be the future franchise RB, be a really great backup RB if Bell signs a long term deal with Pittsburgh.

This isn’t a very great tackle class, but Minnesota gets a steal here.

The Patriots get a franchise running back in Guice.

Philadelphia gets a solid guard in Hernandez.

By: Ade The Great

The Knicks could use a wing player, and Bridges is a pretty safe bet to become useful as a plus defender and perimeter scorer. He’s a smooth athlete whose ability to space the floor and guard multiple positions makes him an easy theoretical fit in any lineup. Creating his own shot off the dribble is a weakness, but as a secondary scorer, Bridges has room to improve and give you enough everywhere else. However, he may not have the upside of others in this range. 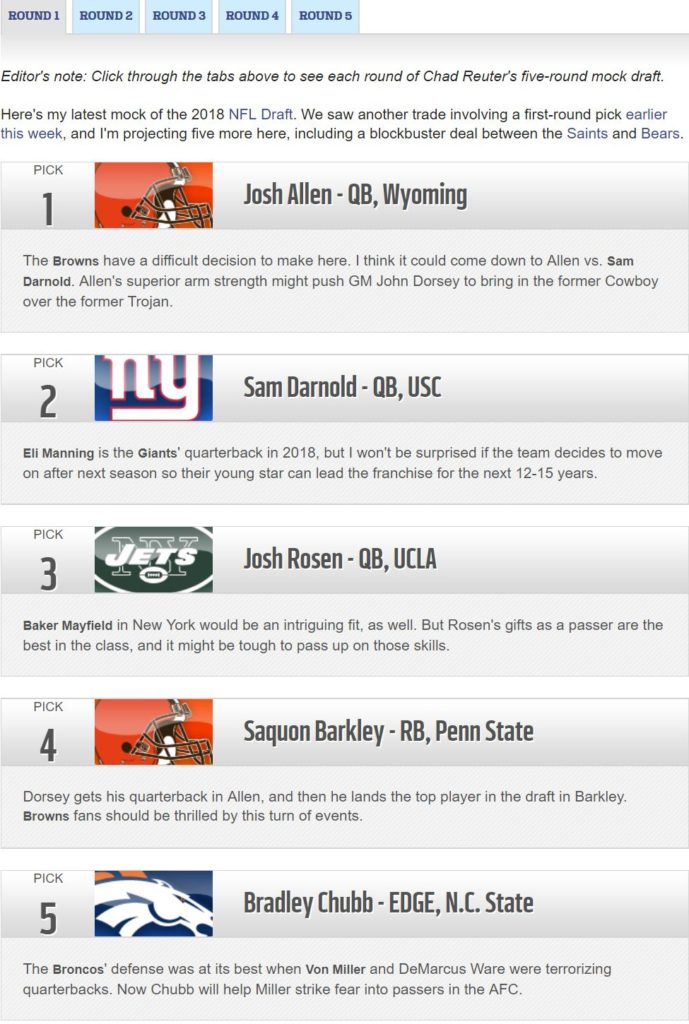 The Browns will be decent next season if the Top 5 play out like this.